“Dumsor is a dreaded name in Ghana, synonymous with the subhuman “Dracula” who sucks human blood and spreads the undead curse along winding roads within the thick, dark and ancient forest and over mountain passes”.

The word “Dumsor” is of Ghanaian origin, and in the Akan language it connotes “off and on” (dum so), with Wikipedia spelling it as “Dumsor” and suggesting to mean “a persistent, irregular, and unpredictable electric power outage”. Macmillan explains “Dumsor” as the problem of frequent power outages in Ghana.

Politicians in Ghana have sought to explain Dumsor in many ways to score cheap political advantage, depending on which side of the political divide they are associate with. But largely the general populace shares in the definition as given by both Wikipedia and Macmillan. And it remains a feared word among Ghanaians as it is associated with extended blackouts (mostly accompanied by Load Shedding timetables); in contrast with the practice of other countries where blackouts roll rapidly so that no residential area is without light for more than an hour at a time.

During the blackouts some people are compelled to sleep in the open at night and at the mercy of insects, reptiles, thieves and rapists et cetera when it visits and electricity had to be rationed. Other social and economic costs of Dumsor includes but not limited to reduction in productivity, increases in production/service costs, collapse of businesses, loss of jobs, damaged to appliances, food going stale, and disruption of planned events.

And while some use chargeable lamps, kerosene lanterns, torchlights and electric generators to pass the nights, others resort to the use of candles; which has been identified as one of the causes of fire outbreaks in Ghana. The prolonged power outages are usually met with public outcry and anger, which leads some to demonstrate violently against it.

But just when everyone thought that year 2016 was the last time the country would have gone through those horrible days, the monster has reared its head again; forcing Ghanaians to take to social media and the airwaves to vent their frustrations and anger, while government officials continue denying the existent of the phenomena, even when Load Shedding timetable was issued (though briefly) to manage the deficit in power demand to some extent.

Past Incidents of Power Crisis

Ghana has seen its electricity power generation gone through a lot of phases. It first started with Diesel generators and stand-alone electricity supply systems owned and operated by industrial mines and factories. It received a major boost from the Hydro-electric power phase following the construction of the Akosombo dam, and now to a thermal complement phase.

The inauguration of Ghana’s Akosombo hydroelectric dam with generation capacity of 1,020 megawatt (MW) in 1966 after completion in 1965, was described as the beginning of a new era for the country, boosting the creation of a modern industrialized state. The then president, Osagyefo Dr. Kwame Nkrumah described the Akosombo project as “the new places for Pilgrimage in the modern age of Science and Technology”, an inspiration for the rest of Africa and the world alike.

Hopes were that the power generated from the “Volta Lake” as it came to be called, would perpetually take the country out of darkness; practically availing power to every home and offering stimulus for the modernization of new and existing industries.

Fast forward to the year 1984, Ghana was confronted with its first electricity crisis as the nation plunged into darkness as a result of a severe drought of the lake; very much attributable to climate between 1982 and 1984. The total inflow into the dam between 1982 and 1984 was reported to be less than 15 % of the expected total, and this triggered power rationing and a reduction of electricity supply to neighboring countries, including Togo and Benin. The country’s failure to add on to the generation capacity in tandem with population growth largely exposed it over-dependence on the hydro power.

Notwithstanding the addition of 160 MW to the country’s installed capacity with the commissioning of the Kpong Hydro-electric power station in 1982, another power crisis emerged in 1998; largely as a result of low rainfalls and inflows to the Volta Lake. Although the demand for electricity had falling slightly from 5110 GWh in 1991 to 4965 GWh by 1998, the electricity supply deficit was significant enough to introduce the second round of power rationing.

Beyond the first two power crisis which was largely blamed on God for not providing enough rain to feed the Akosombo dam, the country had to experience yet another period of inadequate power supply between 2006 and 2007. The third round of power rationing led to the introduction of Thermal Power Plants into Ghana’s generation mix, with the first of these thermal plants being the 550 MW facility (Tapco and Tico) at Aboadze in the Western Region of Ghana.

After 2007, the country was once again visited with darkness between 2012 and 2016. The uniqueness of the 2012 – 2016 power crisis was the longer period the Ghanaian had to endure with rotating Load Shedding timetable, which earned the name “Dumsor”. And in the early part of 2015, the Dumsor Load Shedding schedule went from “24 hours with lights on and 12 hours without light” to “12 hours with lights on and 24 hours without lights.

Low generation capacity to meet the projected demand, poor maintenance schedule for power plants, inadequate supply of natural gas, low stock of liquid fuels, delay in the completion of Ghana Gas Project, low water level in the Volta Lake, and lack of funds to procure especially fuels; were identified as the key factors that impacted on the reliable supply of electricity.

In terms of cost of these prolonged outages, the Institute of Statistical, Social and Economic Research (ISSER) estimates that the economy of Ghana lost approximately $615 million in 2015. And so by extension one can conclude that close to $3 billion was lost to productivity during the peak of the crisis between 2012 and 2016.

In previous power crisis, the major challenge had largely been power generation shortfalls. But the narratives have changed tremendously.

At the end of 2013, the total installed capacity of hydroelectric power had increased to 1,580 Megawatts (MW) from 1,020 MW when Hydro power was introduced in 1966. Thermal power plants installed capacity had also grown to approximately 2,179 Megawatts (MW) by the close of 2016. And while Ghana realized an increase of over 49 percent in Peak load between 2006 and 2016 to record 1997 MW, Generation capacity was also boosted by more than 54 percent over the same period, from 1,730 MW to 3,775 MW; an annual average increase of 8.60 percent.

Aside having one of the highest rates of access to electricity in sub-Saharan Africa (second to South Africa), Ghana currently boast of over 4,750 MW of Installed Generation Capacity from largely hydro-electric and thermal sources. Net Dependable Capacity exceeds 4,320 MW, and the current Peak Demand rarely exceeds 2,680 MW. 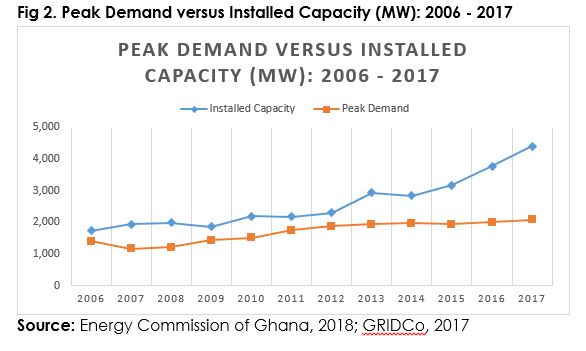 The country is also significantly endowed with natural gas to fuel the power plants which are largely dual-fuel-fired. And the Volta Lake is currently at a decent level of over 79 meters (79.754m at January 4th 2019) compared to the prior year level of 76 meters (76.557m at January 4th 2018).

These situations under normal circumstances presents great comfort for a state that has an agenda to pursue an aggressive and rapid industrialization, and provide economic opportunities for its growing population. And that it was thought that the monster called Dumsor may never have to visit the country again with its attending social and economic hardship.

However since November 2018, Ghana has been experiencing a recurring power outages. This situation has developed even though the Installed generation capacity is far in excess of the country’s peak demand.

Today Dumsor continue to dwell with us as a country as a result of numerous challenges confronting the energy sector; that serves as constraints to achieving Ghana’s vision of industrialization for economic prosperity.

Aside technical, regulatory, and procurement factors; the sector’s poor financial health and mounting legacy debt, huge losses in the transmission and distribution systems, poor revenue collection, over-reliance on hydro and thermal generation plants, poor planning, poor tariff structure, and political interference in decision making, are some of the key challenges impacting on the reliability of electricity supply to Ghanaians.

The writer has over 22 years of experience in the technical and management areas of Oil and Gas Management, Banking and Finance, and Mechanical Engineering; working in both the Gold Mining and Oil sector. He is currently working as an Oil Trader, Consultant, and Policy Analyst in the global energy sector. He serves as a resource to many global energy research firms, including Argus Media.

Why the US is targeting a flamboyant Nigerian banker

The Elite’s COVID-19 Coup: Fighting for our Humanity, Our Liberty and Our Future