No single security person has been prosecuted for the attacks on more than 25 journalists and media employees since 2006.
Although the perpetrators in some of the cases are identified, the cases are settled sometimes with apologies.

In most cases, however, no compensation is paid, while the security organisation involved promise to offer better working relations with the media.

Checks by the Daily Graphic have revealed a tall list of victims, including reporters, photojournalists, station managers and editors, who have been brutally assaulted by soldiers and policemen.

Some of the attacks have left journalists with serious medical conditions. For instance, the Daily Graphic’s Victor Kwawukume has lost his sense of smell as a result of being beaten by the Ho Police while covering a swoop on criminals.

In another instance, Mr Latif Iddrisu, a journalist with the Multimedia Group, was left with a fractured skull after the police had brutally assaulted him in front of the Criminal Investigation Department (CID) Headquarters in Accra while reporting on a protest by some members of the National Democratic Congress (NDC) against

the detention of the then Deputy General Secretary of the party, Mr Koku Anyidoho, in July 2018.

But when it comes to prosecution, in some instances the police told the victims that the dockets on their cases were missing, turning the case into what is known as ‘foolish case’.

“My case did not get anywhere. It got to a point where they were just tossing me up and down at the Police Headquarters. Eventually they said they couldn’t find the docket.

There was no apology, no prosecution; just frustration,” Ms Gifty Lawson, a photojournalist with the Daily Guide, recounted the aftermath of her assault in 2012.

She was assaulted when she was covering the cocaine-turned-soda case which led to the dismissal of Superintendent of Police (DSP) Mrs Gifty Tehoda, who was later reinstated after winning a suit against her dismissal.

For two weeks Ms Lawson said she stayed at home, traumatised and scared.

Memories of officers of the Bureau of National Investigations (BNI) threatening to shoot her for taking pictures of a suspect, while more than 30 policemen looked on unconcerned, gave her nightmares.

The latest incident involving 10 policemen who allegedly assaulted three journalists of the Ghanaian Times last Thursday has raked the wounds of the past, with journalists urging their umbrella body, the Ghana Journalists Association (GJA), to declare a blackout on police activities nationwide.

A photojournalist with the Ghanaian Times, Mr Geoffrey Buta, who was also beaten in Tamale in March 2014 for trying to take a picture of a confrontation between some military personnel and some youth of the area, told the Daily Graphic that until drastic action was taken, such as prosecution and a blackout, the situation would continue.

“In my case, they said they would deal with our Accra office to handle the issue. Nothing came out of it. It became a foolish case. With this current incident, we must not allow it to go. 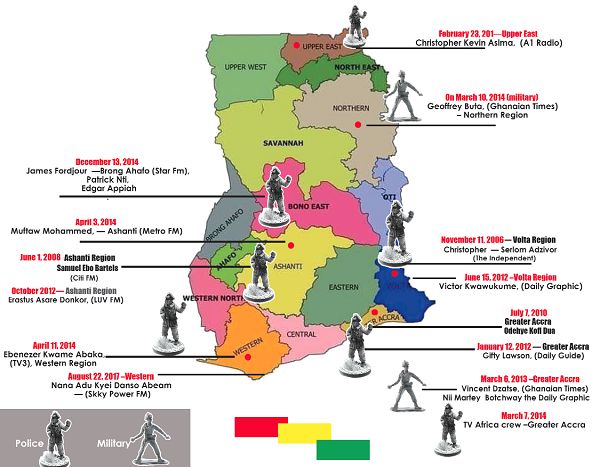 Something must be done, otherwise they know they can beat us and get away with it.

“Tomorrow, they will invite us to cover their assignments, then beat us the next day and apologise. If these people are not prosecuted to serve as an example to others, they will continue to disrespect us,” he said.

The President of the GJA, Mr Rowland Affail Monney, told the Daily Graphic that the issue was a complex one that needed a collective decision.

He said for the current situation, the GJA was consulting lawyers and would take the necessary action after the police had reacted to the incident.

Mr Monney cited the example of 2018 when the GJA called for the boycott of a forum jointly organised by the police and the Media Foundation for West Africa (MFWA) until the police could produce their men who assaulted Mr Iddrisu.

However, he said, most media houses defied the request, attended and reported on the event.

“It is a collective responsibility because the GJA cannot do this alone. We need support from civil society and media consumers. The people in whose interest we work should rally to our support as well,” he said.

In a statement last Friday, the police said it was investigating the incident in which Mr Malik Sulemana, a reporter, and Mr Salifu Abdul-Rahman, Senior Assistant Editor, both of the Ghanaian Times, were assaulted, alongside another reporter, Ms Raissa Sambo, a nursing mother, who ended up on admission at the Greater Accra Regional Hospital.

Commenting on the lack of prosecution of security personnel who assaulted journalists, Mr Monney described the situation as unfortunate.
He said the GJA had, in the past, resorted to dialogue with the security services because “we need each other”.

The GJA President said contrary to the perception that the association was not doing enough, it always had the interest of journalists at heart.

He cited the example of photojournalists Nii Martey Botchway of the Graphic Communications Group Limited and Vincent Dzatse of the New Times Corporation who were compensated after an assault on them by military men during Independence Day celebrations at the Black Star Square in Accra in 2013.

He said the military hierarchy also gave an assurance that it would deal with its men found culpable.

However, in April 2013, the military exonerated its men involved in the assault, saying “the outcome of investigation, diligently and dispassionately conducted, suggests no wrongdoing on the part of the soldiers, as they acted within the rules and guidelines governing activities at the time of the anniversary parade”.

But the Executive Director of the MFWA, Mr Sulemana Braimah, told the Daily Graphic that the lack of prosecution “breeds a culture of impunity, where people think they can do anything and get away with it”.

He said it was time media houses showed that they cared about their journalists by pursuing those cases to their logical conclusion.

He, however, observed that there had been instances when journalists decided not to pursue those cases, although the foundation and other stakeholders had insisted on holding the perpetrators’ feet to fire.

“It’s something that happens quite often when the victims accept compensation,” he said, adding that under the circumstances, the victims could only report such cases to the police and hope that they would take the necessary action.

When contacted, Assistant Commissioner of Police Mr David Eklu, the Director-General of the Public Affairs Directorate of the Ghana Police Service, asked for the list of cases to speak to the issue.

In an email response, Mr Eklu wrote: “The list you sent did not indicate whether a complaint was lodged by the victims at any police station. It will be good to know whether that was done to make follow-ups on police action possible.”

Some of the cases reported in the Ghanaian media and by the MFWA include Christopher Serlom Adzivor, The Independent, Samuel Ebo Bartels, Citi FM; Anas Aremeyaw Anas, Crusading Guide; Halifax Ansah-Addo and Gifty Lawson, both of Daily Guide; Victor Kwawukume and Nii Martey Botchway of the Daily Graphic and Mr Erastus Asare Donkor of Luv FM.

Two dead, many in critical conditions in Konongo-Kumasi highway accident